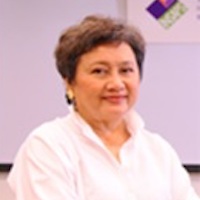 Ms. Apiradi Tantraporn, the Chairperson of Senate Committee on Commerce and Industry of Thailand. She was the Minister of Commerce in Thailand from 2015 to 2017, and a Deputy Minister in 2014. From 2009 to 2014 she serves as the Executive Chairperson at the International Institute for Asia-Pacific Studies (INSAPS) at Bangkok University. Prior to that, H.E. Tantraporn held several high-level posts for the Thai Ministry of Commerce, including Deputy Permanent Secretary in 2009, Director general, department of Foreign Trade (2006-2009), Director General, Department of Trade Negotiations (2002-2006), and Director-general, Department of Business Economics in 2002. She was posted to Geneva first as a Counselor (1985-1989), Minister (1995-1997) and Ambassador to the WTO (1999-2002). She was involved in and appointed as chief negotiator of Thailand in various bilateral and multilateral negotiations, and was involved in AFTA, CEPT and AEC negotiations. She holds Master’s Degree in Business Administration and a Master Degree in International Trade from Syracuse University, USA.