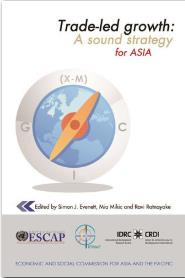 The 2008/9 global economic crisis triggered changes in real economies and trade in all countries, including those in Asia, which adopted the so-called export-led growth model. With these drastic changes in trade flows, and the need to counteract potential adverse effects, the old debate on the advantages and flaws of the export-led model has re-opened, adding new concerns to the debate such as aspects of sustainability and inclusivity. The Asia-Pacific Research and Training Network on Trade organized a conference in November 2009 on the topic and brought together policymakers, researchers and analysts from the region and outside it. The selection of the papers discussed at the conference is presented in this volume. It aims to provide some theoretical and empirical reasons towards an argument that for developing Asian economies, export-led growth is still a valid model of stable, equitable and sustainable growth. The volume is an attempt to provide a balanced assessment of the role of trade in growth and development. It also combines local (regional) research with that of established experts/institutions. While there is extensive literature focusing on the role of openness and trade in a country’s development, much of it dates to before the most recent (2008-2009) global crisis. Furthermore, during the crisis and most recently, the volumes that were published mostly argued against an export-led growth strategy, while this volume argues in defense of trade-led growth for the Asian region.