If the outcome of the Signalling Conference in July 2008 is any indication, it is that many governments have now embraced competition in a broad range of services sectors. In the telecommunications sector, in particular, a significant number of the 31 World Trade Organization (WTO) member countries that participated in the conference expressed willingness to either improve their existing systems or to undertake new commitments in both basic and value-added services. Policy responses to the rice crisis: Past practices and recommendations for South Asia

South Asia 1 produces approximately 32 per cent of the world’s rice and accounts for 31 per cent of global consumption. Rice is the main food staple for Asians and accounts for more than 40 per cent of their calorie consumption. The poor in Asia spend around 30-40 per cent of their income on rice, and it is a major source of income for a majority of the poor residing in the rural areas (International Rice Research Institute, 2008). For all these reasons, even small changes in the global rice markets can have a significant impact on the well-being of large numbers of people in South Asia. Good public governance has emerged as a key determinant of the economic performance of countries, in part because the quality of public governance influences both local and foreign investment decisions. Many countries in the Asia and Pacific region have made improvements in their government effectiveness between 2004 and 2007. The progress made by many Asian countries has been achieved through the adoption and implementation of reforms and initiatives specifically designed to improve public governance. Trade facilitation has come to be widely recognized as an important part of regional and multilateral efforts at promoting trade integration. This policy brief suggests that developing countries may have more to gain from trade facilitation than at first thought. By influencing the fixed costs that make it difficult for firms to access global markets, trade facilitation efforts can make it possible for firms to export new products and enter new markets. ARTNeT Alerts on Trade Finance in Times of Crisis and Beyond

The current financial crisis has provided a useful reminder of how essential trade finance is to international trade. Why do least developed countries in Asia not benefit more from transfers of technology? Faced with a global recession, policymakers around the world are currently considering measures to help their national economies recover from the impact of the financial crisis. Several countries have adopted fiscal stimulus packages that support selected industries, including the car industry and financial sector. Over the years, developing countries, commonly referred to as “the South,” have emerged as an important player in the world economy as manifested in terms of global GDP, investment, savings, trade, foreign exchange or manufacturing capability. With the increase in the overall growth of the South and its decreasing dependence on trade with developed countries, also referred to as “the North,” trade among countries of the South, also known as “South-South trade,” can provide resources for meeting the developmental goals of the South. 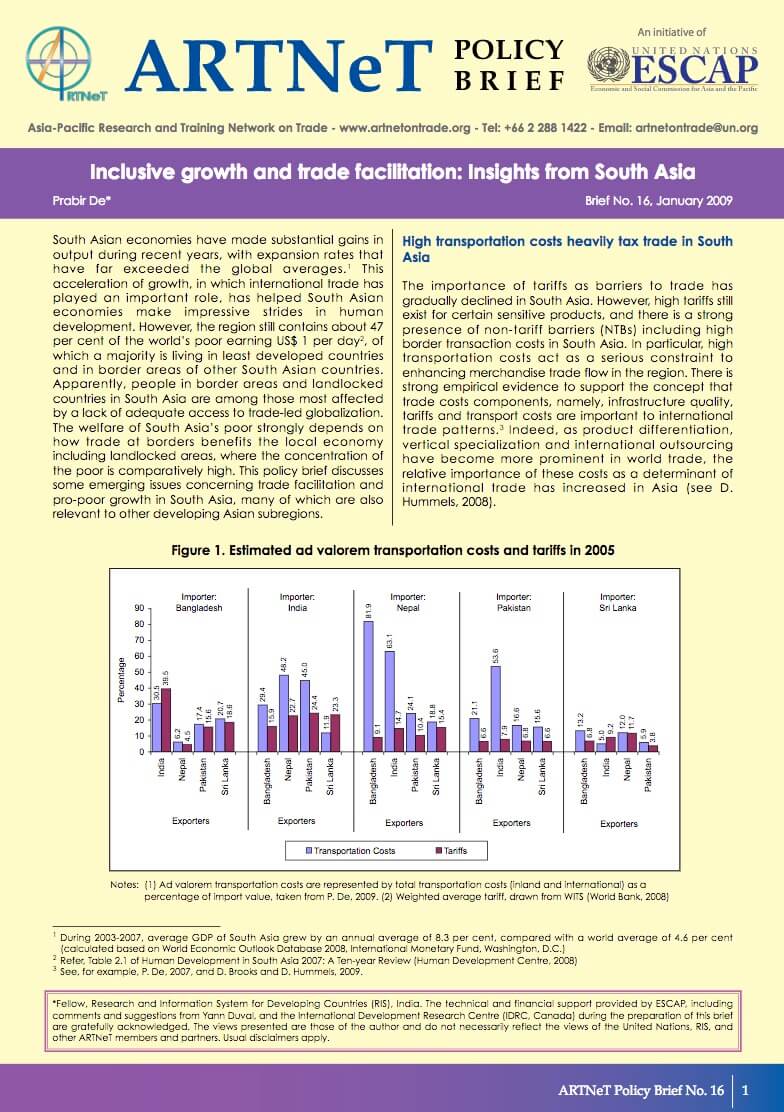 South Asian economies have made substantial gains in output during recent years, with expansion rates that have far exceeded the global averages. This acceleration of growth, in which international trade has played an important role, has helped South Asian economies make impressive strides in human development. However, the region still contains about 47 per cent of the world’s poor earning US$ 1 per day, of which a majority is living in least developed countries and in border areas of other South Asian countries. Asia has undoubtedly benefited greatly from globalization, with many countries of the region relying to a significant extent on international trade and investment as their main engine for economic growth and development. As the economies of the region continue to grow at the fastest pace of any other regions in the world, however, some have begun to question how well the gains are shared within the countries themselves. Indeed, there is some evidence that higher economic growth has led to increases in inequality in the countries of the region.