AWP 183 April 2019 Badri Narayanan G., Rahul Sen and Sadhana Srivastava
Adequate attention has not been paid by researchers towards general equilibrium effects of trade liberalization particularly involving trade in global value chains (GVC) goods, in spite of its emergence being an established phenomenon among Regional Comprehensive Economic Partnership (RCEP) members including India. This paper contributes in that aspect by undertaking a Computable General Equilibrium (CGE) simulation utilizing the GTAP 9 database updated to 2015, augmenting it to study the automobile sector of trade in GVC goods in the Indian context. In the case of automobile industry, ours is the first attempt to employ this tool in this context and this is one of the methodological/data contributions of this paper. The key here is to analyze the welfare effects for India, in a probable futuristic scenario of a full tariff liberalization (with and without any productivity improvement) as part of the ongoing RCEP negotiations, and the specific impact of this on output, prices and trade in the automobile and auto-parts industry, wherein GVC led trade assumes significance... The impact of odd-even transportation policy and other factors on pollution in Delhi: A spatial and RDD analysis

AWP 182 March 2019 Somesh K Mathur, P M Prasad, Praveen Kulshreshtha, Sangeeta Khorana and Manish Chauhan
This paper is motivated by persistent environmental problems in Delhi, India which present a serious threat to the well-being of the people in the city. The authors use a statistical approach to quantify the relationship between new transportation policy adopted by the Delhi Government, other controlled factors like meteorological conditions, price of fossil fuel, ban on crackers, burning of agriculture residue, among others on the concentration of various gaseous pollutants and air pollution levels at certain measurement stations in Delhi. Moreover, they try to explain whether the odd-even transportation policy has been able to reduce pollution in Delhi both in short and long run and its impact on pollution levels existing in Delhi. At the end, they suggest some policy measures which should be undertaken to reduce pollution levels in Delhi. What does RCEP mean for insiders and outsiders? The Experience of India and Sri Lanka

This paper explores the economic implications of the Regional Comprehensive Economic Partnership (RCEP) – Asia’s largest trade agreement - on India and Sri Lanka. The findings from existing model-based studies suggest that India, as an insider economy, will potentially gain from the RCEP while outsider economy Sri Lanka will likely loose. India faces challenges in the RCEP negotiations in liberalizing goods and services trade and adopting new intellectual property rules. Building business competitiveness and policy reforms can mitigate these challenges. This paper replicates the study of Topalova (2010), performs a robustness check, and extends the findings by applying the estimation technique to the economy of Thailand. Topalova (2010) found that trade liberalization in India has heterogenous effects on poverty and household consumption. More specifically, districts in which production sectors are more exposed to trade openness, experienced less poverty reduction and slower consumption growth. The effects of trade reform on poverty have been extended to a squared poverty gap, and the results are robust to other poverty measures. Corruption and the business environment in Viet Nam: An exploratory survey

AWP 179 April 2018 Daisuke Maruichi and Masato Abe
This paper examines the effect of corruption on the business environment in Viet Nam. Our survey of firms operating in Viet Nam suggests that corruption is perceived as the most severe business constraint for their operation. Also, corruption has a significant negative association with the overall satisfaction of the business environment in Viet Nam. Such results support the hypothesis that corruption has a “sand the wheel” effect on firms’ business activities. While this paper sheds light on the importance of corruption, it would be useful to conduct follow-up studies to examine corruption and its impact in more detail. Such studies could be conducted in those segments that most severely suffer from corruption according to our survey, i.e., medium-sized enterprises, hotel/restaurant and construction sectors, Hanoi based, and Vietnamese owned firms. 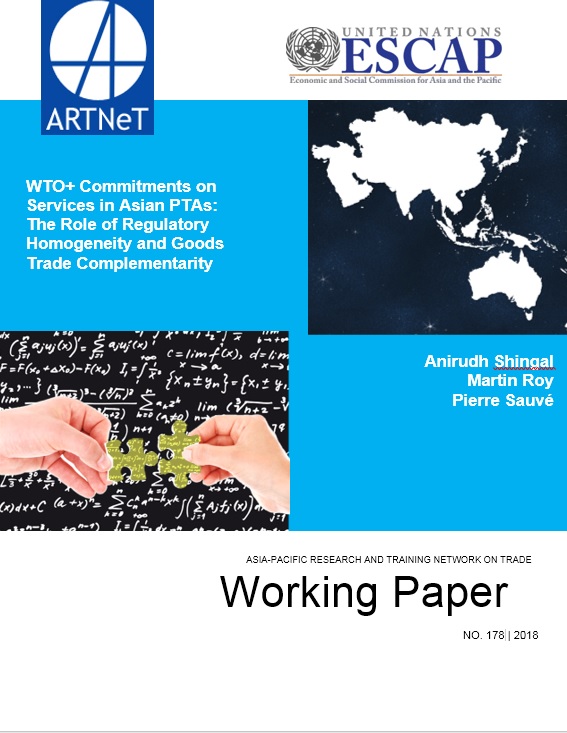 WTO+ Commitments on Services in Asian PTAs: The Role of Regulatory Homogeneity and Goods Trade Complementarity

AWP 178 February 2018 Anirudh Shingal, Martin Roy and Pierre Sauvé
This paper looks at the role of applied services regulations in accounting for WTO+ commitments on trade in services in preferential trade agreements (PTAs) among Asian economies. The empirical findings suggest that Asian trading dyads with regulatory frameworks that are more similar and more trade-restrictive tend to undertake higher levels of WTO+ commitments on services in their PTAs. There is also evidence in the results for such WTO+ commitments being driven by goods trade complementarities, alluding to the importance of supply chain dynamics in the region. Such results support the hypothesis that the heightened “servicification” of production generates a greater demand for lower services input costs and for certainty against possible new and disruptive services barriers. South-South cooperation in the era of Global Value Chains: What can China offer?

AWP 177 February 2018 Shunli Yao
China is a success story of inclusive trade growth as a result of its participation in Global Value Chains (GVCs). It is in transition from a processing and assembly hub towards an innovation centre, and is becoming a regional supplier of research and development (R&D) intensive parts and components. The infrastructure projects under the Belt and Road Initiative (BRI), a quasi-regional trade arrangement, are helping to improve regional connectivity and production linkage, but Chinese manufacturing also bring shocks to local production and employment. The proliferation of RTAs is a central feature of the world trade policy environment in the last 20 years. This paper provides an empirical study of the extent to which the formation of RTAs has changed the distribution of world goods trade among trading partners. To do this, it constructs a new measure, an index which measures the extent of bilateral trade between pairs of countries in each year. On average for the world economy this measure does not increase over the sample period 1981 to 2016. 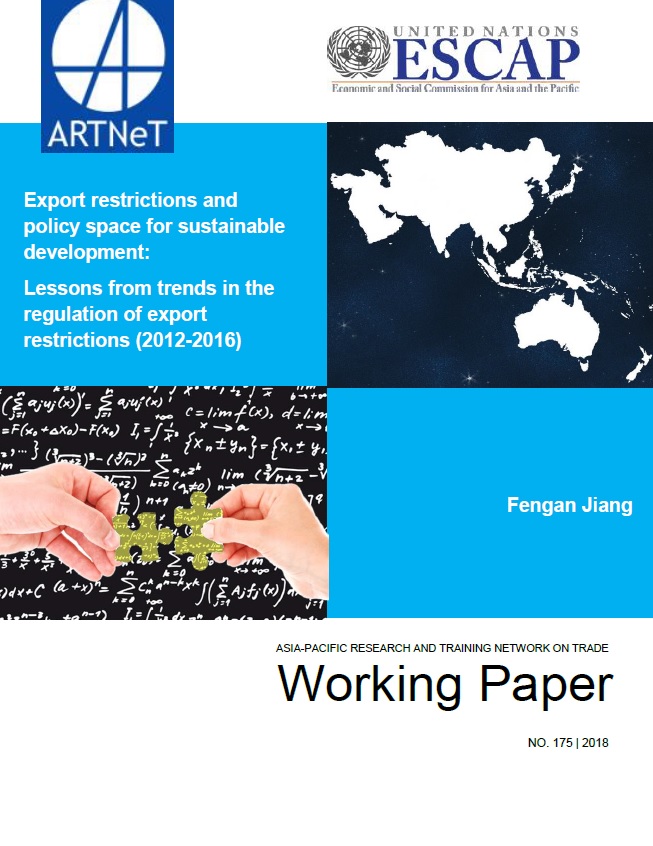 AWP 175 January 2018 Fengan Jiang
The General Agreement on Tariffs and Trade 1994 (GATT 1994) generally prohibits the World Trade Organization (WTO) members from using export quotas and other quantitative restrictions with certain exceptions. By contrast, export duties are not regulated under the GATT 1994 though a few WTO members such as China commit to restricting the use of export duties in their WTO accession protocols. Given the plethora of regional trade agreements (RTAs) and the slow progress of the WTO Doha Round of multilateral trade negotiations, the incorporation of WTO-plus provisions into RTAs that regulate export restrictions in a more effective manner could contribute to a transparent and predictable trade regime. Impact of implementation of digital trade facilitation on trade costs